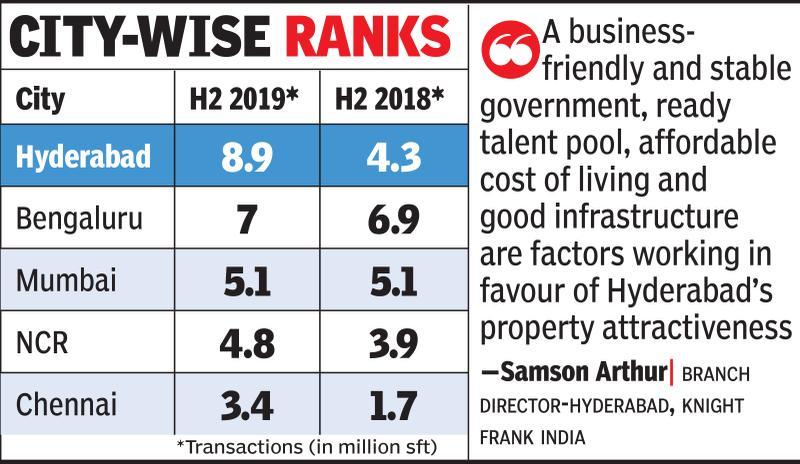 The year 2019 also saw Hyderabad record an all-time high of 12.8 msft in terms of office transaction volumes, an 82% jump over the 7 msft figure it clocked in 2018. However, despite its record breaking performance, the city emerged second in office transactions for 2019 after Bengaluru, which topped the charts with 15.3 msft transactions in 2019 vis a vis 13.4 million in 2018. Mumbai came third here too with 9.7 msft office transactions during the full year as compared to 7.9 msft in 2018.

Knight Frank pointed out that infrastructure constraints in Bengaluru are prompting IT/ITeS occupiers to consider Hyderabad for their expansion plans. Adding to Hyderabad’s attractiveness quotient is the availability of a rich and diverse talent pool thanks to the presence of premier educational institutions.

“Hyderabad’s remarkable surge brings it at par with other major markets.... Primarily driven by organic growth of technology and ITeS companies, this demand is expected to remain stable in the near future. Increased activity in the co-working segment is further supplementing the city’s growth momentum,” Samson Arthur, branch director-Hyderabad, Knight Frank India, said while releasing the report.